A South African couple forewent tradition by requesting financial donations to help pay off Rhodes University students’ fee debts instead of wedding gifts when they got married earlier this month.

James Rycroft and Toni Parsons are both Rhodes alumni. They each received a one-year bursary award from the English Olympiad and both went on to read for a Bachelor of Arts degree with English as a major, which is how they met in 2001.

“We lost touch after graduating and it was through Facebook that we reconnected. We met again in 2016 through our dear friend Natasha, and got engaged in 2018 in Esizindeni, near Coffee Bay, during our December cross-country road trip,” they said.

The couple got married in Southbroom on the Kwa-Zulu Natal south coast at the beginning of October 2019.

The couple spoke to their alma mater to explain that their request for financial aid for students was inspired by a fellow old Rhodian and friend, Natasha Joseph, who has been running an annual call for contributions to clear students’ fee accounts since 2017.

“Earning a degree is often a key life moment for a young person and we felt strongly about directing our community resources to helping a few young people at the university to graduate,” said James.

Toni added: “We believe that earning a degree should not be inhibited by your [in]ability to pay. A degree from a quality institution like Rhodes University can lead to serious opportunities when you enter the world of work. The contributions made by our community are intended in that spirit – to help those students who are unable to graduate, not because they did not meet academic standards, but because they were unable to raise the cash.”

Rhodes University Vice Chancellor, Dr Sizwe Mabizela accepted the couple’s gift and thanked them in a letter with these words.

“This has impacted me deeply. It proves, once again, the calibre and well-roundedness of our graduates. At a time when young couples would normally and naturally only think of their own comfort and improving their lives, they have both actioned a social purpose and are living proof of our alumni.” 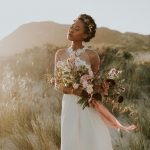 5 Special things to gift yourself before your wedding day because you deserve it!