When you really think about it, the idea of walking down the aisle carrying a bunch of flowers seems a bit odd. Perhaps for decorative purposes it works, but one could argue its a bit random and inconvenient, and serves to block the full view of the main attraction – the wedding gown – as well.

Yet, you’d be hard-pressed to find a bride without a bouquet, or at least some form of it. Many consider it to be an essential part of the bride’s look.

While we can all agree that the bouquet does add a touch of natural beauty which is unmatched, this is not the reason brides carry bunches of blossoms. Like most other wedding traditions, the practice is rooted in reasoning from centuries passed.

In Ancient Rome, brides would carry flowers as they were believed to signify new beginnings, fidelity and hope of fertility, according to Modern Wedding. Bouquets, however, were not always made up of flowers.

Herbs took preference for brides in the Middle Ages. Dill and garlic were most commonly used as they were said to ward off evil spirits and bad luck, according to Readers Digest. Reportedly, the dill would make a second appearance on the wedding day – during the feast – to prepare the newlyweds for the consumation of their marriage since it is considered an aphrodisiac.

Later on, during the Victorian Era, the act of giving and receiving flowers came to be known as an expression of love. As they were then linked to love and romance, they increasingly became incorportated into weddings.

Since then, it seems the practice has stuck and is not going anywhere either. Flowers are incorporated into weddings through bouquets, table decorations, and much more.

There is a popular myth that has been reported by many publications, including Bustle, which that claims another reason for the bouquet in the 15th century was to mask the smell of the bride.

This claim is based on the fact that, in those times, people only had one bath per year. Huffington Post reported that June was the most popualr month for weddings and most women took their annual bath in May.

According to Snopes, an online fact checking resouce, this is not true. Brides have never carried a bouquet to mask their smell.

“Although the modern practice of full-immersion bathing was a long way off in the 1500s (among other reasons because filling a vessel large enough to hold a person with heated water was rather impractical given the effort required to collect fresh water and fuel for heating it), people did still “bathe” in the sense of attempting to clean themselves as best they could with the resources at hand,” explains Snopes.

“Although today’s brides carry flowers simply because it is now the custom to do so, at one time bridal bouquets were symbols of sexuality and fertility. Covering up anyone’s bad smell played no part in why this custom came into being.” Get the look: Modern-day princess Survivor couples: Castaways who found love in the jungle 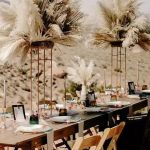