They say that money can’t buy everything (and certainly not love), but often when wedding plan talks are in the works, it’s easy to get caught up in the tale that “expensive is better.”

But is it, actually?

Recently, Reddit users decided to weigh in on the topic.

u/11sam111 kicked off the conversation with the concept that expanding one’s budget to focus money beyond the big day (ie: on honeymoons!) is a better way to go than cashing it all in for a day where “you miss everything because it’s so busy.”

Other Reddit users were quick to share their responses and shed light on what actually makes the day memorable that more often than not, doesn’t come with a price tag.

Here’s what people’s thoughts were:

Stick to what you can afford

“We had a $300 wedding and spent the $20k that would have gone to a bit wedding on a house down payment and medical bills for having our kid. On the other hand my friend had a $35k wedding that was two full days of having a blast with all of her loved ones and that’s okay too! No shame either way as long you stick to what you can afford and don’t hurt anyone.” – ThrowRA_SILspilled

“I’ve talked with several people that did a similar thing, they all regret nothing. One took all the wedding money he was gonna spend and used it on a down payment for a house, and another used it to take a month off with his husband to travel.” – Jan_Itor_Md_

If you spend it, don’t regret it

“I have no regrets about spending money for an event that was meaningful to the people I love.” – the_lemon_lobster

Don’t let your wedding put you in debt

“One of my friends spent 30k on his wedding. Then was upset because he and his new wife couldn’t afford to get [an] apartment together because they were in debt for 25k cus they took a loan to pay for it. Just insanity” – keyboardstatic

“I mean honestly, it’s your money and people waste the majority of their money on frivolous stuff anyway so if that’s what you chose to spend your money on and it made you happy, then kudos to you. I’m not really knocking the people who do per se, I just don’t understand it. But I totally don’t need to.” –SonOfSet1

“I eloped with my now husband in feb of 2020 (pre lockdown) we used the money we save to fly to Thailand first class and spent two weeks travelling for only 8grand total! Waaaay better use of our time.” – MidnaMarbles

What are your thoughts? Are you team “as expensive as possible” or team “save it for something else meaningful”? 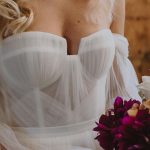 Looking for the perfect wedding dress? Here are a few tips to find ‘the one’

These honeymoon destinations are most common among divorced couples Eco-friendly escapes for your honeymoon