You’ve surely heard the phrase “tie the knot” many times in reference to marriage. The saying is quite common globally. In fact, “tie the knot” is so common a phrase that nobody really questions what knots really have to do with marriage at all.

Many claim that the expression’s etymology is unknown and that the theories that do exist are not rooted in facts. That being said, there is one theory that stands out and is very commonly cited as the true genesis of the saying.

The theory suggests that the phrase “tying the knot” comes from a centuries old wedding tradition called the “handfasting ceremony”. Handfasting is an ancient Celtic practice that can be traced back to the medieval era (the 5th to the 15th century).

Essentially, a couple who was to be engaged would have their hands tied together with cloth effectively binding them together and making them one. The handfasting’s purpose was to strengthen the bond between the couple before the official wedding. The ceremony would take place “a year and a day” before the official marriage, where a second handfasting would take place.

Some have understood the practice as a betrothal or an engagement ceremony while others have conceptualised it as a “trial period”. Those who prefer the “trial period” version argue that the second handfasting would only take place if the couple got along in the “year and a day” since their first handfasting.

While the Celtics of Scotland are often touted as the originators of the practice, the ancient Mayans and the Hindu Vedic community have also been linked to similar ceremonies.

In fact, tied knots are symbolic of marriages and love in many cultures and places. In the Roman times, a bride would wear a belt tied in a “Hercules knot”. The knot was said to indicate the binding character of the marriage oath.

Hercules Knot Known variously as the Knot of Hercules, Heracles Knot, Love Knot and Marriage Knot, the Hercules Knot is a wedding symbol that stands for undying love and commitment. #herculesknot #hercules #heraclesknot #loveknot #marriageknot #love #commitment This knot made with two entwined ropes is considered to represent the legendary fertility of God Hercules. #entwinedknots #legendaryfertility Though it was initially used in ancient Egypt as a healing charm, the knot became more popular among the ancient Greeks and Romans as a love token and a protective amulet. It was incorporated into the bride’s protective girdle which the groom ceremonially untied. #ancientegypt #healingcharm #ancientgreeks #romans #lovetoken #protectiveamulet #girdle #groom The Hercules Knot is believed to be the origin of ‘tying the knot’, a phrase that means getting married. #tyingtheknot #gettingmarried

In England, France and Denmark, the “True-love’s knot” represents love and fidelity. Ribbons tied in a true-love’s knot were distributed as party favours at weddings or, in France specifically, were tied around the arm.

In the Philipines, a rope is placed on the shoulders of the couple to show fidelity and in Hindi weddings a part of the bride’s outfit is tied to her groom’s scarf to represent an everlasting bond.

The handfasting ceremony has not disappeared over time. According to BBC, “before 1939 handfastings which took place in lieu of a church wedding were legally recognised as weddings resulting in marriage”. Today, in Scotland, handfastings are purely ceremonial but they may take place on the same day, or even at the same time as the official nuptials.

The practice is by no-means limited to people of Scottish descent, anyone is free to have a handfasting ceremony. So if you’re looking for something interesting and unusual to incorporate into your special day, why not consider a symbolic handfasting ceremony? You could even hold on to the resulting knot as a keepsake from your wedding day!

Here are some examples of handfasting today:

A post shared by Coordinadora-Oficiante Bodas (@utopiaeventspr) on Jan 9, 2020 at 8:10am PST

Upon this day our hands we bind, a symbol of our hearts entwined 💍 Love a traditional handfasting for “tying the knot!”

A post shared by Florida Wedding Photographer (@alexandriasalmieri) on Jan 10, 2019 at 11:51am PST

#handfasting is very popular and a symbolic way of showing that you are bound together for life. One of my favourites! #Repost @fuzeceremonies • • • • • • A ROMANCE-BLASTING HANDFASTING 💑💥 Add a MAJORLY romantic dimension to your ceremony by incorporating the ancient Celtic marriage ritual of handfasting. Check out our latest blog over on the website to find out why we're so OB-SESSED!! @wonderfulandstrangeinsta #handfasting #celtichandfasting #handfastingceremony #marriagerituals #symbolicgestures #weddinginspo #weddinginspiration #thatsdarling #isaidyes #engaged #weddingplanning #festivalbrides #junebugweddings #humanistceremony #humanistcelebrant #fuzeceremonies #scottishwedding #scottishcelebrant

I love this idea, a hand-fasting ceremony surrounded by nature & symbolising your promise, did you know this is where we get the term tying the knot! Leni @uniquetoyouceremonies says the cords or ribbons used can be tied in with your colour theme, charms can be sewn on, and you can even make them yourself, or you could use some material that means something to you, a loved one’s scarf, or a piece from some clothes that mean something to you 💖 Photo @jenilowephotography Suit @david_jason_menswear #weddingcelebrant #handfasting #bridalrelovedcaistor #celebrant #ceremonies #tailoredceremony #tietheknot #uniquetoyouceremony #symboliselove #spiritualceremony #yourweddingyourway #ourwedding #ourweddingday #handfastingceremony #lincolnshirewedding #bridalrelovedcaistor #lincolnshireweddinginspo #

Wishing a very Merry Christmas to one & all. Saturday’s “cool” couple Manchester born Chris & his adventurous Australian born bride Lauren held their Handfasting Ceremony in glorious Manchester, in a Vodka Loft! After a first meeting at the Hilton we knew that Together we would create a perfect Handfasting ceremony- which included family, their beliefs, a fun love story, exchange of wedding rings, remembering loved ones and ended with a traditional tying of the knot! Lots of Lauren’s family travelled from Australia and for those who couldn’t we were able to FaceTime the ceremony. Over 100 close family and dear friends attended this winter solstice wedding & support our couple with love and laughter. What a wonderful memory we created! Congratulations Lauren & Chris, the new Mr & Mrs Clitheroe, wishing you a happy & healthy marriage adventure together. Thanks to Cassie & team at Revolution Oxford Road & Maddy the photographer x 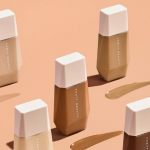 The wait is over! Fenty Beauty is finally in SA Why do we go on honeymoon? Amazing wedding customs from around the world