An engagement usually includes a ring. Your partner gets down on one knee and pops the question. A beautiful ring is placed on your finger and you’re over the moon with happiness. When the big day finally comes is the same ring used? If not what happens to the ring? What is the difference between the engagement and wedding ring?

“It was our ninth anniversary and Andy told me to pack my bags for a surprise trip. I was ecstatic because I had a feeling we were going to Banff — a place I’ve always dreamed of visiting. I packed my bag and we headed to dinner. On the way, I remember saying that he’d lost his touch for surprises because I had already figured out where we were going — or so I thought! After dinner, we went back to our apartment and he suggested that we take some photos on our rooftop because the sunset was stunning. As the doors opened to the roof, I saw a beautiful arch in the corner paired with a perfect view of the city. The arch was made of fresh flowers and moss, and so it truly felt like a concrete jungle up there. I still had no clue as to what was going on! I thought Andy had just this set up for photos. Suddenly, I heard a drone buzzing above me. I looked up and it began descending towards us with a ring box attached to it. I was shocked! Andy grabbed the box, got down on his knee and asked me to marry him. I said yes! It was a beautiful moment and truly everything I could’ve asked for. Oh, and there was no surprise trip… THIS was the surprise! So, he definitely hasn’t lost his touch.” — @jlinhh #justsaidyes

One big difference between the two rings is the timing. The engagement ring is given when your partner proposes. The wedding ring is exchanged between the couple on their big day.

“If you would’ve told me I was going to marry David, I probably would’ve laughed at you. We first met in college. We knew about one another (it was a small private college), but we both were in relationships at the time. I left that college after my first year there. Fast forward six years later and I get a private message on my Instagram (yes, he literally slid in my DM!) from David. At this point in my life, I was taking a much needed break from the dating seen. I had been single for over 2 years at this point, needless to say, I wasn’t paying any attention to men. But I thank God that I responded to his message. David wanted to hang out, but I didn’t want to take time out of my life to see him. So, I told him that I have a kickboxing class Tuesday night if he wants to hang out. Surprisingly, he showed up! After class we had a long and wonderful chat. From that night on, we spoke every day. There was something different about this guy.” Featured: @kimbsasser & @thedavidsasser

Usually but not always its the design of the two rings that differs too. The engagement ring is meant to make a statement and have a massive wow factor. It is meant to be an indicator of your partners wealth. It typically has a large beautiful stone or consists of many small ones. With that being said this is by no means necessary. Many couples opt for simple rings and have no desire for elaborate expensive rings. The wedding ring is normally quite simple and plain. It is usually a lot cheaper as it’s not as elaborate as the engagement ring.

Should you wear both rings at the same time, if you have both?

www.BoxofDreamsPhotography.com With this ring, I give you my promise that from this day forward you shall not walk alone. I have no greater gift to give. May my heart be your shelter and my arms be your home. May we walk together through all things. May you feel deeply loved, for indeed you are. May you always see the innocence in my eyes. May we feel this joy forever.

Problems occur when the rings don’t match. It often looks odd or don’t fit together on the same finger and can become uncomfortable. It can be quite difficult to find two different rings that match when worn together.

The rings are worn on the fourth finger on the left hand. The vein in the ring finger is believed to be closest to your heart. It is called the vena amoris which means the vein of love. 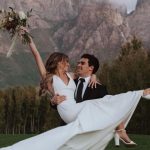 How do you know when you are ready for marriage? The moving ins and outs of insurance for co-habiting