For many of us, characters from TV shows are like friends. We’ve cried with them and laughed with them. We’ve seen them fall in love, and even get married.

There have been many iconic TV weddings that are still spoken about to this day. Whether it be because of the long and complicated relationship leading up to the event or a crazy moment on the day itself, these weddings have stood the test of time.

Here are some of our favourite TV weddings.

Jim and Pam – The Office

The ultimate ‘will-they-or-won’t-they’ couple, Jim and Pam had audiences frustratingly waiting season after season for them to realise they were perfect for each other. The couple finally wed in the show’s sixth season in a hilarious two-part episode that saw the entire cast dance down the aisle to Chris Brown’s ‘Forever’.

Leslie and Ben – Parks and Recreation

Leslie and Ben of Parks and Recreation are one of the most adorable and loved couples to ever grace the small screen. In season 5, the couple impulsively decided to say ‘I do’ earlier than planned and spent only two hours planning the wedding. They enlisted their friends and co-workers to help, which led to many successes and mistakes. Leslie eventually gave up, but her best friend Ann arranged for them to get married in their office in front of all their co-workers. The finale of Gilmore Girls left many fans needing closure on the future of Luke and Lorelei’s relationship. Their prayers were answered in the Netflix revival, Gilmore Girls, a Day in the Life.

The couple started out as friends that were clearly in love with each other but annoyingly could not see it. After breaking up and making up, they decided to elope the day before their wedding, marrying in a magical ceremony that saw their friends and family decorate Stars Hollow to perfectly match the couple. Marshall and Lilly – How I Met Your Mother

As one of the most adorable and long-lasting couples of the show, How I Met Your Mother‘s Marshall and Lilly captured the hearts of thousands of viewers. However, their wedding day went from disaster to disaster. From Lilly’s ex trying to stop the wedding to the harp player going into labour right before the ceremony, this day seemed beyond repair. However, they decided to rather hold a small ceremony officiated by their friend Barney under a park tree, like how they had always wanted. The Red Wedding – Game of Thrones

This wedding is one of the most iconic weddings to ever be aired on television, although it wasn’t for being warm and fuzzy. What began as a nice, normal wedding ended in absolute carnage.

The wedding of Edmure Tully to Roslin Frey turned out to be a ruse for Walder Frey to exact revenge on King of the North, Robb Stark, after he went back on his promise to marry one of Frey’s daughters. At the reception, Frey had his men murder Robb, his pregnant wife Talisa and his mother, Lady Catelynn.

And just like that, two major characters were killed off in one fell swoop.

The Purple Wedding – Game of Thrones

Clearly the Game of Thrones writers do not like weddings. Another wedding aired on the popular HBO show ended in death, this time for the much-hated King Joffrey. After marrying Margaery Tyrell, Joffrey was poisoned at his wedding reception by Lady Olenna Tyrell, although his uncle, Tyrion Lannister, was blamed for it. The image of Joffrey choking on his own bile has become stuck in the mind of every GOT viewer since. This wedding was a long time coming. The adorable Cam and Mitchell were one of the most hilarious couples on Modern Family, and had many fans rooting for them. A series of mishaps threatened to ruin the wedding, including the wrong tux being delivered and wildfire that caused everyone to evacuate. The couple is about to cancel their wedding when Mitch’s father, Jay, announces that he has secured a country club as a wedding venue. They finally wed as a voiceover from Mitch’s sister details her beautifully written ‘best person’ speech. Chuck and Blair’s love-hate relationship was greatly detailed through the six seasons of the popular CW show. While they couldn’t seem to make it work, fans always dreamed of a happily ever after for this feisty duo.

They finally wed in the show’s finale episode, after being on the run after Chuck’s father plunged to his death. Chuck’s uncle convinces the pair to marry so that Blair would have spousal privilege and not have to testify against Chuck, which they eagerly agree to. Right after their first kiss as a married couple, Chuck is arrested. We would expect nothing less from this dramatically iconic couple. As a much-loved couple, Monica and Chandler’s wedding was highly anticipated by fans. After Chandler gets cold feet and leaves the night before the wedding, the plans seem to be off. However, Ross is able to convince him to go forward with the wedding.

Chandler and Monica wed in the show’s seventh season in a surprisingly simple and sweet ceremony officiated by Joey. Their tear-jerking wedding vows remind us all that love still exists. What does it mean to have cold feet? 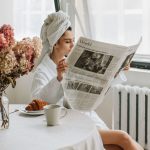 5 Ways to practice self care while planning your wedding