Eeny meeny miney mo, if you want to propose, where’s the best place to go? Cape Town Tourism surveyed people on Twitter, Facebook and Instagram to find the best places in Cape Town to pop the question. They also collected responses from users of The Perfect Proposal,  wedding and proposal planners, and the most common answer was… The V&A Waterfront, followed closely by Table Mountain.

If there was anywhere in the world where love could blossom against a truly beautiful backdrop, it is the city of Cape Town. According to the online dating platform WeLoveDates.com, the Mother City ranked 21st among the most romantic cities in the world and was the second most romantic city on the continent after Marrakech.

With a plethora of landmarks that are perfectly suited for amorous encounters, it is easy to see how Cape Town can stir the cockles of one’s heart.

CEO of Cape Town Tourism Enver Duminy says, “It’s hard to think of a better city to find the freedom to declare your undying love in. Whether you are atop Table Mountain or on the beach, you won’t struggle to find the perfect venue to propose. Afterwards, you can mark the occasion at any one of the city’s world-class restaurants.” 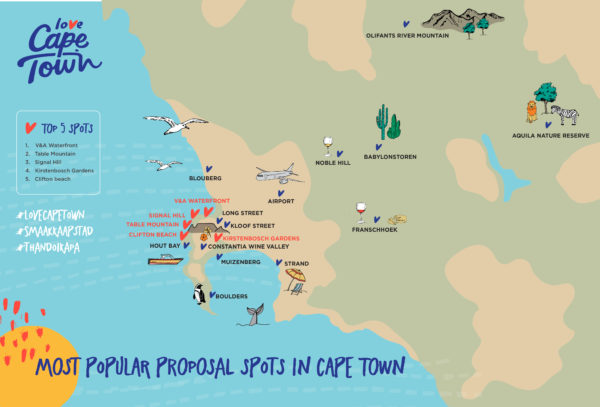 Here are sweet proposal stories from some of the city’s most special spots to bend the knee:

Sometimes proposals are an intimate affair involving a small group of people or even just the couple getting engaged. Other times however, you’ve got to go big. Instagram’s @gemini_gerard went for the second option.

“I proposed to my wife at Kirstenbosch gardens after watching The Notebook at the @thegalileo. Before the screening I had arranged for them to play a personal video once the movie had finished. The video chronicled our journey over the last six years. Once it finished, I took her by the hand and led her to the front of the screen.

There, in front of 600+ people, I got down on one knee and asked if she would do me the honour of spending the rest of her life with me. She said yes which is when the last part of the surprise happened. I had hidden her friends and family in the back so when she said yes, they all jumped out.”

Masego and Letlotlo came to Cape Town on holiday. Masego had wanted to pop the question to her partner of 10 years for a long time and this holiday was the perfect moment. She wanted something different, like an art studio or gallery. A place where they could paint and create.

With the help of The Perfect Proposal, they arranged a private session at the Art Jamming studio in the Waterfront. The studio designed and created a “marry me” sign, which was used as the grand gesture in the proposal. On arrival, the couple entered, and went into the “splash” room where an easel with a yellow and black art piece was waiting for them. Letlotlo was told to start peeling the flaps, which eventually revealed letters spelling out ‘marry me’?

Not all proposals go according to plan but that doesn’t make them any less perfect as Janine Naicker explains:

“My proposal happened at Signal Hill. It didn’t go according to my husband’s plan – at all. Firstly, it was so full that we couldn’t find parking, so we had to park along the side. He then invited me to get out of the car to look at the view with him. My response – ‘It’s too windy!’ (It really was).

“After a few failed attempts, he got back into the car and pulled out a box with two cupcakes that he had gotten for us. He handed it to me and asked me to pass him one. When I opened the box, there was a ring placed in the icing of one of the cupcakes. I was speechless and turned to him, he then said ‘Janine Hendricks, will you marry me?’

“We hiked up hoping to catch the sunrise at the same spot as our first date (which was a hike up the mountain). We made it and then, just as the sun was rising, he got on bended knee and proposed to me. It was so perfect and romantic. Next month, we will be together 5 years.”

“Our first date was at the Strand Beach. We agreed on the beach because it was convenient for both of us. It was amazing. We just sat on a bench listening to the waves crashing in the background and spoke for hours about everything and anything. Fast forward a few years. We had planned a night out with some friends. Little did I know what was about to happen.

“He pulled me aside and told me he wanted to take a quick detour and that we would meet up with our friends later. He explained that he just wanted a moment alone without the kids, which I thought was so sweet. So we went to the beach, to the exact bench we had had our first date on. We started talking, just as we had all those years ago and then he went down on one knee. I honestly couldn’t believe what was happening, but it was the most romantic thing ever. Afterwards, we met up with our friends and boy did we have a story to tell them. We’ve been married for a year now.”

Here’s a list of some of Cape Town’s lesser-known locations that are perfect for proposals:

Garden Route on the list of most romantic road trips in the world! Games to play at your bridal shower Wedding gifts all newlyweds will appreciate