With 12 official languages, 9 provinces, and a country filled with love, it’s fair to say that South Africa’s diversity is pretty amazing.

Planning and celebrating weddings differ across cultures and religions in South Africa, and it is important for all locals and Internationals to be informed about the unique traditions the country has to offer.

With that being said, Wedding Etc has started an exciting and informing series that will delve into several wedding cultures and traditions in South Africa. The series will primarily focus on the cultural wedding attires of the groom, bride, and guests.

In the first series piece we will be covering the Xhosa wedding attire. Keep an eye out for our future features on others such as the Zulu, Indian and Muslim cultures.

The Xhosa ethnic group is the second-largest cultural group in South Africa and their weddings are a huge celebration. The bride, called the umakoti, is traditionally the centre of attention.

On her special day the bride wears a long skirt or dress which is called the Ijermani or isishweshwe, which symbolizes that she is no longer a girl. The skirt is like no other as it is covered in beautiful embroidery and beadwork from top to button.

This part of the outfit is then paired with a tartan blanket that wraps neatly around the bride’s shoulder. The blanket represents the protection and care that the bride-to-be will add to her new family.

The final touches include a woolen scarf around the bride’s waist, a black doek and beaded necklaces, bracelets, necklaces, and a matching handbag. The groom’s outfit is quite a powerful statement as it is usually warrior inspired and also echo’s his bride’s attire. He wears a white wrap around his waist that has the same decorations as the bride. The groom also wears a blanket, called ingwaca, over his shoulders. To finish the look, the groom’s head and neck are showered with beads. The bridesmaids and groomsmen attire

The family members of the newlyweds dress in similar patterns and fabrics. They are not as extravagant but they complement the couple of the day. 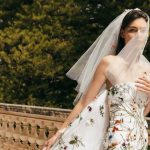