Whether you want animals as a backdrop for your wedding photos or using them for your grand entrance, live creatures aren’t for your wedding decoration. It may seem ‘stunning’ or produce that extra ‘wow’ factor, but at the end of the day, it’s cruel and not fair on the animals.

The maid of honour tried her best to discourage the bride from this idea, but sadly, she would not budge.  As hard as it may seem, not everyone wants to go home with an unexpected new pet. As the wedding reception commenced, she was left with having to keep an eye on the fish centerpieces. A few goldfish checked out a little early, but the newly married couple had ‘spares in the back’.

By the end of the night, as the maid of honour predicted, guests left without their special ‘wedding favours’. The maid of honour was saddled with 100 goldfish. She rushed to the pet shop to get a bigger tank but many had died by the time she got home.

In the end, only one out of the 100 goldfish survived. The fish named Sun lived for five years, a duration longer than her friendship with the bride and even longer than the marriage.

The use of animals as wedding props doesn’t end there. Elephants have been used in wedding ceremonies for decades. These majestic creatures are kept captive, and live in fear of being forced into submission by abuse. The elephants are used to make an entrance or exit by the couple, for the wedding photoshoot and sometimes just as decoration.

Taking them out of their natural habitat and subjecting them to the needs and desires of your wedding day is not okay. Simple ways to incorporate the Pride flag into your LGBTQIA+ wedding Match your flower arrangement with the season 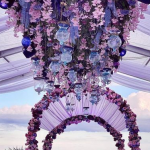